The centre doesn’t move in respect to the circumference. It sits there and seemingly does nothing. Yet, we can safely conclude from our previous observations that this centre point is most likely rotating at incredible speeds. This centre might rotate on its own axis, but that’s the most entertainment you’ll ever see from it. Let’s take the seed of a plant to illustrate what I mean. This centre is the seed in the ground: if it moves, the circle it creates moves inevitably with it.

From this centre seed then grow roots and eventually what’s going to be the plant or tree. What was once a seed, has become the centre of an ellipse divided in two by the soil as a horizon. The roots have an entirely different purpose than the plant itself.

Humans and any other interested species, generally focus their attention on either the flowers the plants produces, or the fruits of the tree. Again: they focus on the circumference, on the side of the horizon they can see. 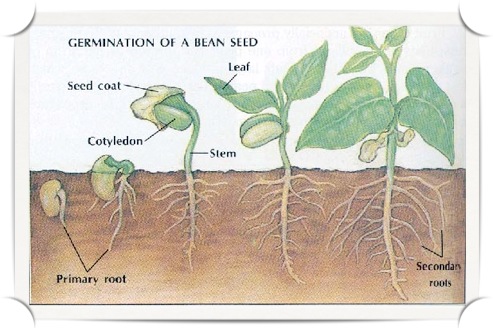 Illustration 10: From seed to plant: the germination process.

The same goes for any other reproductive process. While I’m no expert, and I’m not even sure if science can even confirm this, but for some strange reason, I feel that when a semen of the male enters the egg of the female, the first cell divisions are only doing one thing: creating the reproductive parts. From there on forth, cell division works its way in both the direction of the feet and the head.

Let’s remind ourselves of an important and historic picture. 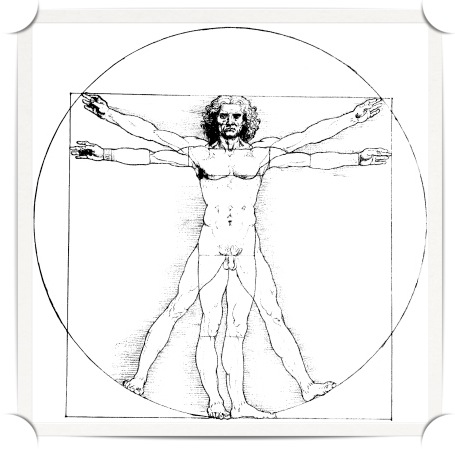 Da Vinci — or the guy that inspired him — did a great deal of homework for me. It’s close to what I’m getting at. So the head of the human body, is the top, and the feet are the bottom.

In analogy with our plant, the human body isn’t any different. The centre are what we call our private parts. If we get out of a shower, it’s the first thing we want to cover up. It’s also the main important thing males and females talk about among each other. It’s what almost ever music video on commercial channels are about, it’s what makes a good romantic book or movie truly “sensual”.

Just like with the plant, the centre of the human body is the mystery. By the time we’re 10 to 12 years old, we’ve all figured out what’s it all for, and we love doing it, and it’s the single most important driver of our lives. Our whole society is based on it.

Whatever you do in life, it must radiate you’re a healthy male or female, fit for reproduction. From the cleaning lady spending the daily 30 minutes in the bathroom putting on her make up, to the guy in the suit working at the bank, trying to move his way up the ladder. It’s how we got from 3.5 billion to 7.1 billion humans in little over half a century.

Sex is also one of the few acts of life that radically just does what it does, regardless of the life you’re living, the values you have, or the beliefs you stand for. It happens every second on the planet. Sex changes everything, some say.

As much as sex is the source of procreation, and men and women love doing it, it is as obscure as the centre of our galaxy and how it keeps it all together.

Something I’ve learnt from this is that the centre of the circle is beyond what we can comprehend. It’s autonomous and doesn’t need understanding, for it never fails its function.

The centre of the circle is all about creation. We can’t warp our heads around it. We can see it, feel it, hold it and even taste it, but not one living being understands the magic when those two cells decide to randomly start dividing according to some blueprint.

It is magical, just like the rest of our lives. For me personally, it answers the age old question of creation. We can’t even grasp how our own procreation works, but we fight wars about how all this got created? Let’s cut ourselves some slack, and specifically our egos, and see ourselves for the little ant-colony we are.

Our mother Earth tells us every day. How little we know and understand about the core of our own hosting planet. There are theories that the Earth might be hollow on the inside, and there are theories that the Earth might be expanding. Whether those theories are true or not, I find it remarkable that, with all our technological wonders of the last few decades, we’re still trying to find our way explaining the various obscure centres in our lives, including that of our own bodies and our hosting planet.