Cycles are magnificent in how they create the movement and dynamic. Because you as an observer are always spinning on your circle, it keeps it all interesting — it’d be boring to sit in the centre of the circle and watch it all go by.

One night in Melbourne, I was having one of my random nights. I love random nights, especially because they aren’t random, they are often the most purposeful of all.

I met a young German guy and we philosophised about life. At one point he was praising technology and how it would save the planet, and I argued humans had a fairly poor track record so far. I asked him if he could name any technological invention that hadn’t created half a dozen new problems in the long run. As I always roll these sentences out on the fly, I started thinking myself, and added “and you can’t use the invention of the bicycle”.

We couldn’t find anything. A bicycle, of all things. We just realised it as we were sitting there, with smartphones in our pockets, watching a Christmas laser projection on a church, seeing hybrid cars and electric trams making their way to their destination, while the last flight to Tasmania was flying overhead. It was a strange moment, and it gave me goosebumps. 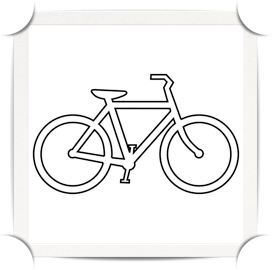 Illustration 4: A bicycle. One of humanity’s most brilliant inventions of all time.

Obviously, this wasn’t scientific research with WikiPedia standing behind us to back up our claims. However, the magic of the moment decided bicycles would be the thing we’d come up with. This little transportation device managed to successfully transform the linear movement of our legs into circular movement.

Semantics are important, and the word “bicycle” means two cycles or circles. That was an important discovery and further focussed my attention on cycles.

Further on we’ll see that straight lines are in fact a misperception and that they always curve and bend, and in reality are just a fraction of the edge of a gigantic circle. Furthermore, we’ve seen that all lines that surround us are a part of circles. We then arrive at the inevitable conclusion that, because everything in the Universe is in permanent motion, all we see around are cycles.

There are no hard edges in this Universe. Everything comes and goes, just like ebb and flow, gently fading in and fading out. Trains, cars and planes don’t go instantly to their cruising speed, they accelerate towards it. People don’t just get married on the first date, and real friendships aren’t forged by just clicking an accept button.

Because of our lack of understanding of cycles, people see relationships as lines that should suddenly stop when they ‘break up’, but unfortunately it’s going to take as much time to get from the initial introduction in each other’s life till the peak of the relationship to get over it.

That’s why your friends will tell you when you’re deep down the rabbit hole to “go with the flow”. You just have to let it come to you and let it go again. Appreciate when the point on the other circle is coming to you, and closest to you. Later, when it fades away from you, all you can do is be thankful for the experience you’ve had. The real pain comes from hanging on to those cycles that are spinning away from you.

The more you learn to accept the fact that you’re just cycling around, the more life will make sense to you and the more fulfilment you’ll experience.