Infinity is another interesting mathematical concept, many people struggle to visualise. In mathematics infinity is represented by the ∞ symbol. When you define ∞ on a X axis it is indicated at the utmost right point of the chalkboard in the classroom, and -∞ is at the utmost left side, with zero neatly in the middle.

This visualisation is okay, but it’s generally not well explained by the teacher in the classroom. A straight line does not exist in the Universe and it doesn’t exist in the universe either. Everything bends with the weight of Time. Even light.

The correct explanation is that the line that leaves the chalkboard at the right edge, arrives at the left side of the chalkboard. This is because this apparently straight line bends with the contours of the Earth for 40,000 kilometres in parallel with the ground level. Then it neatly arrives back at the chalkboard’s left side, and while creates this infinity, it has infinite ways to go around the planet too. So what is taught as an infinite line in all math classes is in reality just a tiny representation of the circumference of a gigantic circle.

Circles are one of the Universes basic two dimensional shapes where many of its laws are embedded in. So nothing really starts or gets born. It loops. It follows the edge of the circle. Our night and day and moon phases are probably the most beautiful examples of this simple law. Chaotic as the moon phases in combination with the sunrise and sunsets might seem, they are just two circles spinning in a slightly complex 3D reality.

There’s an important lesson to learn here: we’ve spent hundreds of centuries guessing how we evolve around the Sun and not the other way around. Still today, our observations about life, and the Universe we participate in, are distorted because we aren’t observing from what I call the “God-Chair”. This is an imaginary fixed neutral point outside this Universe where you could see everything moving and rotating, and you wouldn’t have to care about your own movement, neither physical movement or movement due to the course of Time.

So what is infinity? Infinity is nothing more than the part of the circle we can’t see. As irrational as this might sound to you at this point: the ‘biggest’ element of the Universe, is in the smallest element, and the smallest element could well be the biggest thing ever created. Our human sensors have difficulties grasping this, because we are not a neutral observer, we do not sit on the “God Chair”. We are part of this circle. We are moving in dimensions, rotating, spinning and ageing.

That’s the trick in this 3D reality. Although all cycles that surround us are cycles of circles — not always perfect circles, they’re often ellipses (circles bent by Time) — we can only see part of them. There’s a horizon, if you will, that makes the opposite part of where we are “invisible”, much as the absence of the Sun makes us label it as ‘night’.

If you’re wondering what I’ve been smoking, I’ll give you an example of something I’ve discovered during my travels.

I’ve met people from all backgrounds. Often the poorest people were the richest people. They had lived. They had experienced pain and joy. They had been around certain circles and grew from it. While the richer people generally were somewhat talented in the field they were earning money in, but had little understanding about life in general. They knew how to make money, sometimes even lots of it, but they had trouble in their relationships and trouble finding joy in the smaller moments, and usually had one or more drugs keeping them company in their life.

Another apparent thing between these two groups of people was that the latter was taking much effort and paying high insurances fees just “in case something happened”, while the former group was living the moment and was fully aware that this could all end tomorrow, but then at least they had lived life to the fullest. These two groups of people generally know of each other’s existence, but don’t know each other. That’s the horizon. It’s the line beyond which we know something’s there, but we don’t know exactly what.

Circles appear as efficient structures in our day to day lives as well. Just think about the traffic distributors or ring roads around the major cities in the world, or roundabouts. It is no surprise that future visionaries envision future cities as circular rather than the current checkerboard structures of most 19th and 20th century cities. 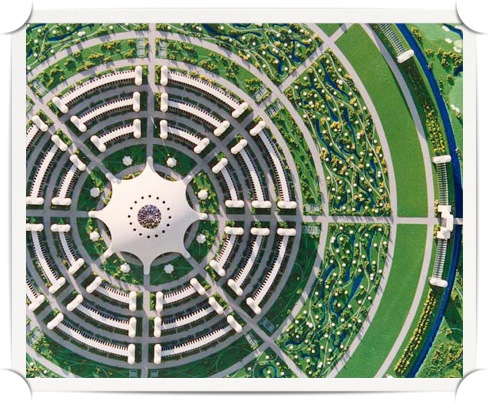 In mechanics too, most efficient tools are using the circle. Think of a chainsaw, or a circular saw. None of these tools try to mimic the human saw action of going back and forth, because it is by far the most inefficient way of cutting through any solid material, or to do anything at all. This is because a “back-and-forth” movement is takes up to twice as much energy, because you have to battle against the momentum of the previous movement, while circular movement continuously builds on the same momentum.

Needless to say, the most important invention of the last few thousand years was circular. The wheel not only eased the path for transportation, it’s also the basis for most engines, whether they are driven by electricity or fossil fuels.  Whenever we implement circles in our day to day lives, we greatly benefit from them.

Since the Universe loves to dance, and circles seem to be one of the geometric cornerstones of it, cycles are born. The cycle of night and day, the female and moon cycle, the cycle of a water molecule on our planet.

Cycles are all that surround us, hence the popular sayings “what comes around, goes around” or “history repeats itself”. This is again an important concept to understand. Many people are all too familiar with this. However, there’s a big step between being familiar with something and understanding how it works.

This has some interesting implications on our lives.