The Law Of Fractals:
A given pattern always consists of smaller patterns that each have the same structure as the parent pattern. This parent pattern is part of a subgroup with numerous identical siblings-patterns, which in turn form the same pattern again.

The great thing is that is a bidirectional relationship, so we can also use this law in the opposite direction: as below, so above. These functional iterations are all around us. They are one of the fingerprints of the Universe that we generally describe as beautiful. 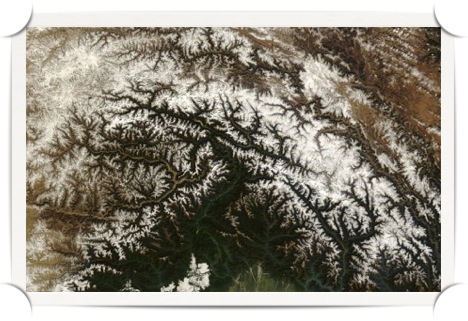 Illustration 1: Areal picture of the Himalayas over Tibet. An example of fractals appearing in nature.

This implies that everything in the whole universe has some sort of DNA code that represents everything we need to know to understand the whole thing.

That’s pretty powerful stuff by itself. Let me give you an example.

We’ve learned how matter exists according to the current human consciousness. Matter exists of molecules. The molecules have a certain distance in between them, depending on the state of the matter (solid, fluid or gas).

Within one of those molecules, there’s another structure to be found, which looks like the level above, only many times smaller: atoms. Again, the same riddle, they are floating around each other. You guessed it, inside atoms we have protons and neutrons. And inside those… that’s where scientists today are trying to warp their brains around.

You catch my drift. This is nothing more than the physical manifestation of the Law Of Infinity from chapter one. There is no smallest element, and the universe (the physical one containing all the galaxies according to today’s scientists) is not the biggest thing out there.

You are a universe by yourself. Each cell in your body might be a galaxy and each thought you have, might be an earthquake or a tsunami or even the birth of a star system. The same goes for your dog or your cat or the apple tree in your garden. Every cell in your body is a universe by itself, and the currently shrinking and expanding universe we know today might be nothing more than a little lung follicle in the lungs of a giant creature that’s just taking a piss in a forest, just as it is about to put its kids to bed.

As much as we’d like to define that the universe is the biggest thing out there, and neutrons or photons are the smallest things possible, they merely define where we as semi-intelligent species stand in our discovery of the physical world around us. We are blinded by a horizon. One can compare our perception of reality with a dot on the circumference of a circle. We can only look left and right. We can’t see the entire circumference, only the part where we’re standing. It’s much like you can’t see much further than 28 kilometres on a clear sunny day, because of the bending of the surface of our planet.

To avoid your mind from revolting too much, I’ll just say that Einstein and Maxwell weren’t wrong, they merely jotted down on paper what we could grasp then. But a lot has changed since then, and no one has really created an updated version recently.